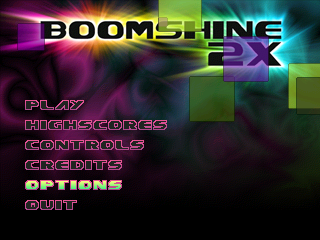 Boomshine2x is a game I’ve written in Fenix and it’s available for the GP2x and the GP2x Wiz handhelds. It’s the second game I’ve released and an authorised clone of popular flash game Boomshine by Danny Miller. I wrote it for the GBAX 2007 Coding Competition, the game was well received and chosen by GamePark Holdings to become a built in game on their GP2x Wiz. Pretty awesome!

Version 1.12 is the final release of Boomshine2x because I’ve lost the source code in a hard disk crash :(.